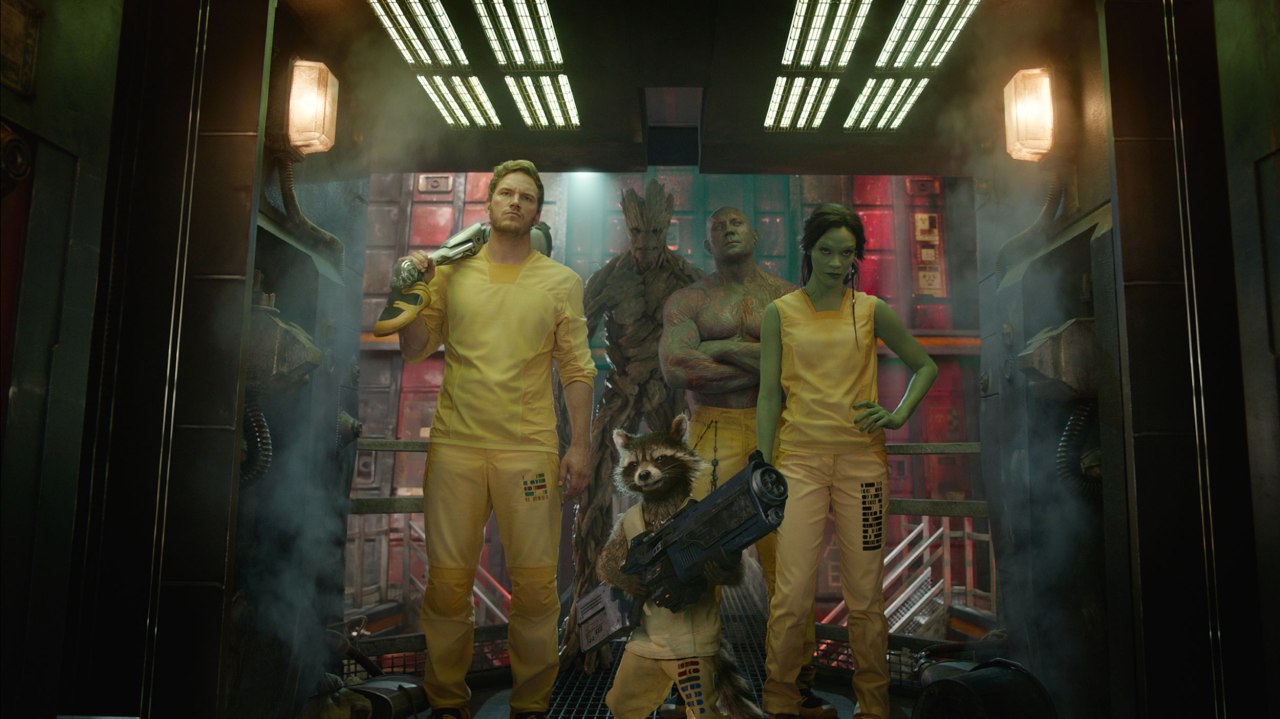 The strangest group of heroes Marvel comics ever created blast off into space in this visually sensational sci-fi action adventure.

It is a fun-filled knockabout romp with stellar design, tremendous special effects and CGI characters blending seamlessly with the real actors.

But it’s gratingly pleased with itself but nowhere near as funny or as smart as it believes itself to be.

It takes far too much juvenile pleasure in rude words and drowning scenes with 1970’s pop tunes quickly wears thin – an unusually needy and heavy-handed attempt at cross-audience, all quadrant appeal by the mighty Marvel studio.

The self styled Star-lord and deluded scoundrel Peter Quill (Chris Pratt) was abducted from Earth as a kid and raised by intergalactic thieves known as the Ravagers.

He hasn’t a lot of experience fighting or leading or coming up with plans. Or having ideas in general. In fact, he’s not all that smart. Plus, generally unskilled.

Nevertheless he manages to steal an orb of mysterious power which is also wanted by the psychotic Ronan (Lee Pace) who secretly works for the powerful Thanos (Josh Brolin). who wants the orb to wage war on his enemies.

Quill is thrown into a space-prison called The Kyln where he meets a warrior called Drax the Destroyer (Dave Bautista) who has sworn vengeance on Ronan.

In a fantastic action sequence they break out alongside Gamora, Rocket, Groot and a spare leg but the script shoots itself in the foot in a space-walk sequence which drains the rest of the film of tension.

When Quill discovers the true danger of the orb he discovers the hero inside himself and cajoles the squabbling misfits to fight a desperate and spectacular battle to guard the galaxy against destruction.

Much like the Hulk in Avengers Assemble, Groot steals every scene he’s in, despite only being able to say the words ‘I am Groot’ – which to be fair, is as much as the Hulk ever managed.

British actress and former Dr Who star Karen Gillan is impressively agile and deliciously villainous and shares a history and a terrific fight scene with Gamora.

Pratt is less endearing than the film supposes and his reprising of a peril-inspired song and dance routine similar to which he performed in The Lego Movie wears thin here.

Guardians of the Galaxy is entertaining enough though not Marvel’s finest hour; after The Winter Soldier it’s not even Marvel’s best film of 2014.

And the joke at the end of the film’s credits isn’t worth hanging around for.

One thought on “Guardians of the Galaxy”